“An exhibition devoted to the reiteration of images in words, in which friction emerges in the process of translation, through a jarring of verbal and visual accounts.”

Gavin Christie still remembers the exact day, August 23, 1981, when he first saw the second edition of Richard Scarry’s Best Word Book Ever. He was at a bookstore in suburban Detroit, and ever since then, Gavin has been regularly recording all the differences between the first edition (1963), which he memorized as a small child in the early 1970′s, and the second edition (1980). Gavin meticulously describes the changes between the editions of the picture book every few weeks, even though the changes never change. 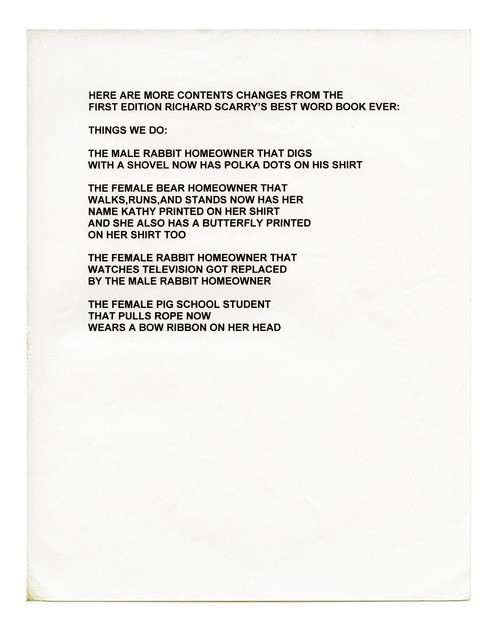 Above:
Best Word Book Ever: Contents Changes, archival digital print, 44″ x 50,” 2013
A book, The Richard Scarry Projects, was produced in conjunction with the exhibition

PRESS: Albany Times-Union
From article: “In her book, Leona Christie notes that Gavin read (and reread) the biography of Scarry who, as a child, made lists in the form of drawings. What Gavin does is an inversion of this — processing images into words and, by presenting them on a large scale, his sister-collaborator effectively makes images of his words.”